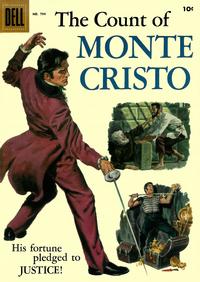 The Count of Monte Cristo (Table of Contents: 1)

Count de Morcerf is depicted in one of the panels, but does not appear in the main story.

The Treasure of Monte Cristo (Table of Contents: 2)

Genre
historical
Characters
Edmond Dantes; Devillefort; Abbe Faria; Danglars
Synopsis
Edmond Dantes is unjustly imprisoned as a political prisoner in the Chateau D'If. He befriends a fellow prisoner, the Abbe Faria, who teaches him many skills over the years. Eventually the Abbe dies, but not before giving him a map to a treasure on the Isle of Monte Cristo. The Abbe's death also gives Dantes the opportunity to escape and he makes his way to the island and finds the treasure.

Part one of a two-part story. Adapted from "The Count of Monte Cristo" by Alexandre Dumas (1844).

The Sword of Justice (Table of Contents: 3)

Genre
historical
Characters
Count of Monte Cristo; Edmond Dantes; DeVillefort; Baron Danglars; Caderousse; Lucien deBray
Synopsis
Having used the treasure to set himself up as the wealthy Count of Monte Cristo, Dantes returns to Marseilles to find those who conspired to send him to prison. After finding them scattered to various places, Dantes goes to Paris and comes up with a plan to extract his revenge on Baron Danglars and his confederate Lucien deBray.

Part two of a two-part story. While the first part is fairly faithful to the original novel, the second part is an original story involving the book's characters, but not following the original plot at all.