The Interplanetary Line-Up! (Table of Contents)

Genre
science fiction
Synopsis
A man accuses one of the people from a masquerade ball of being an actual alien.
Reprints 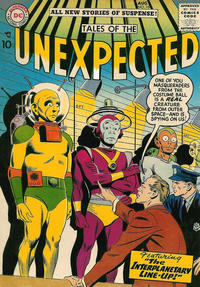 The Magic Hammer (Table of Contents: 2)

Genre
fantasy-supernatural
Characters
Gerald Bard; Thor; Loki
Synopsis
Gerald Bard finds Thor's hammer and uses it as a rainmaker, but Thor arrives to retrieve it. The story explains that Thor’s hammer was stolen from him by Loki.
Reprints

Loki story precursor. Jack Kirby reuses this story of Loki stealing the Hammer for the plot of Journey into Mystery (Marvel, 1952 series) #92 as per Comic Book Historians article researched by Alex Grand.

Genre
science fiction
Synopsis
Aliens use a scientist to do research on Earth for them before their invasion, but they don't count on him having a secret weapon to stop them.
Reprints

Feature is titled Professor Brainstorm in its original printing.

Earn While You Learn! (Table of Contents: 8)

The Exile from Earth (Table of Contents: 9)

Genre
fantasy-supernatural
Characters
Kirk Randall
Synopsis
Kirk Randall uses an ancient Egyptian ring to makes himself invulnerable -- as long as he doesn't touch the ground -- to commit a string of robberies, but he falls onto a roof garden and is caught.
Reprints
Keywords
Eiffel Tower

First Line of Dialogue or Text
I did it! The first man to reach Mars
Genre
humor; science fiction
Reprints

Meeting-Ground of the Spirits (Table of Contents: 11)

The Interplanetary Line-Up (Table of Contents: 12)

Genre
science fiction
Synopsis
A detective searches a science-fiction writers' masquerade ball for an alien. After several mistakes, he finally spots the tell-tale clue giving the alien away.
Reprints