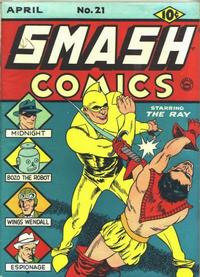 [The Empire of Captain Blue] (Table of Contents: 1)

Genre
superhero
Characters
The Ray [Happy Terrill]; Jackie (introduction, later known as Bud); Keefer; Rogers; Captain Blue (villain, introduction, death)
Synopsis
The Ray, a boy and two men are stranded on a Pacific Island after their plane is shot down by "asiatics". There he meets Captain Blue, a pirate who intends to attack Hawaii, then take over the world after the Americans and the "mongols" destroy each other. Blue imprisons the Ray in a circle of light, and the Ray must rely on his human strength to send Blue over a ledge to his death.

Jackie discovers the Ray's true identity in this story.

First Line of Dialogue or Text
Boris the Blade must not fail to assassinate...
Genre
humor; children

Genre
adventure; superhero
Characters
Midnight [Dave Clark]; Gabby the talking monkey (introduction); Alice O'Day (scientist, death); Slug McGurk (villain); Julie the Jerk (villain)
Synopsis
Midnight comes to the rescue of a purse snatching victim and discovers she's a scientist who can make animals talk. Intending to turn this secret over to government authorities, Alice is attacked and killed by thugs, who burned her secrets, leaving only Gabby as proof that her theories worked. Midnight gains custody of the monkey, after rounding up the people responsible for Alice's death.
Keywords
Vacuum Gun (introduction)

The Vacuum Gun was an automatic that projected a suction cup connected to a self-winding reel of fine silk cord.....strong enough to hold a man's weight, and its suction held to almost any surface.

First Line of Dialogue or Text
Barry, this Seymor Blots may be a financial wizard to the suckers who invest with him, but he's still a crook to me!
Genre
detective-mystery
Characters
The Scarlet Seal [Barry Moore]; Captain Tim Moore; Seymour Blots (villain)

First Line of Dialogue or Text
Dr. Harry Wood, a noted archaeologist, reads the accounts of the murders...
Genre
superhero
Characters
Magno [Tom Dalton]; Dr. Harry Wood; Van Nest
Synopsis
Five archeologists tattoo a map to ancient mystical treasure on the backs of their hands. Now someone is murdering them and stealing those hands.