The Oklahoman (Table of Contents) 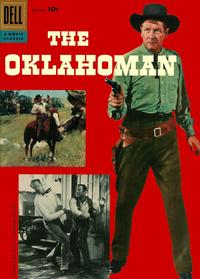 The Oklahoman (Table of Contents: 1)

Inside front cover; black and white. Seven photos from the movie plus partial cast list.

The Oklahoman (Table of Contents: 2)

Genre
western-frontier
Characters
Dr. John Brighton; Cass Dobie; Jim Hawk; Maria Smith; Charlie Smith; Mel Dobie
Synopsis
Dr. John Brighton settles in Cherokee Wells after his wife dies giving birth to his daughter. Five years later, big cattleman Cass Dobie is trying to run off the smaller ranchers and makes an enemy of the Doctor. Cass Dobie suspects there is oil on Indian Charlie Smith's property. He sends his brother Mel to take a sample for analysis, but Smith sees him and Mel tries to shoot him. Smith kills him with a knife and Cass Dobie vows revenge. Dr. Brighton has to keep Smith safe from Cass until the inquest.
Reprints

Based on the 1957 movie "The Oklahoman." Script credit from "Who's Who in American Comic Books 1928-1999" website. Pencils, inks, and letters credits for this sequence from Alberto Becattini (May 14, 2007). "R. Jenney" appears on a store sign in panel two of page two of the story.

Genre
non-fiction
Characters
Edwin Drake
Synopsis
The drilling of the first oil well by Edwin Drake in Pennsylvania in 1859.

Inside back cover; black and white. Panels with typeset text underneath. Pencils and inks credits for this sequence from Alberto Becattini (May 14, 2007).

The Land Rush (Table of Contents: 4)

Genre
non-fiction; western-frontier
Synopsis
A description of the land rush in Oklahoma in 1889.

Back cover. The last panel is Dell's "A Pledge to Parents." Panels with typeset text underneath. Pencils and inks credits for this sequence from Alberto Becattini (May 14, 2007).