Indicia title is "NO SLEEP TILL DAWN No. 831: THE STORY OF BOMBERS B-52".
Code number is N.S.T.D.O.S. #831-579.
Based on 1957 movie "Bombers B-52", which was titled "No Sleep Till Dawn" during production, and was also released in the UK as "No Sleep Till Dawn".
Comic exists in ad and non-ad versions, with different back covers.
"Movie Classic" on cover.
This issue has variants:

"No Sleep Till Dawn" (Table of Contents) 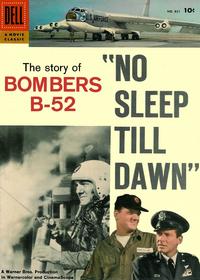 Inside front cover, black and white. Three movie stills plus text. Cast and credits of movie are listed.

No Sleep Till Dawn (Table of Contents: 2)

Genre
drama; war
Characters
Sgt. Chuck Brennan; Col. Jim Herlihy; Lois Brennan; Edith Brennan; Pasquali
Synopsis
Friction develops between a head mechanic and his commanding officer as they prepare an air base for the arrival of the new B-52 bombers.
Reprints

The Stratofortress (Table of Contents: 3)

Genre
non-fiction
Synopsis
Facts about the B-52 Stratofortress.

Inside back cover; black and white. Last panel is Dell's "A Pledge to Parents." Panels with typeset text underneath.

Flight Into History (Table of Contents: 4)

Back cover. This sequence was replaced by an ad for Juicy Fruit Gum in some copies. See sequence 5.