The Impossible Voyage! (Table of Contents) 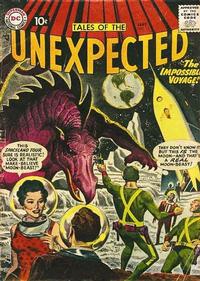 Genre
science fiction
Synopsis
A hotel detective helps a man from the future get a picture of blueprints of a weapon necessary to repel a Martian invasion in 2957.
Reprints

Genre
fantasy-supernatural
Synopsis
Johnny Manton steals a cap from a museum reputed to give its wearer great intelligence, but Manton doesn't know that the cap only allows itself to be used for good.
Reprints

The Bullet Man (Table of Contents: 9)

Genre
science fiction
Synopsis
Due to a mixture of elements from a meteorite and scrap metal from an atomic research lab in his ID tag, inmate Chick Durant is able to leave his cell for 25 minutes at a time. But Durant is stuck on an uncharted island when he reshapes his tag, altering the mixture.
Reprints

Art credits from Saltarella via the GCD Error Tracker and the index to DC Special #4; previously credited as "George Roussos (B Baily?)."

The Impossible Voyage (Table of Contents: 13)

Genre
science fiction
Synopsis
As a prank, aliens take people lining up for a new amusement ride on a real ride through the solar system.
Reprints