The Old and the New! (Table of Contents) 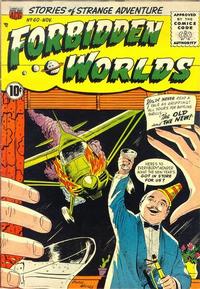 The Passengers in Cabin 9! (Table of Contents: 2)

How I Made a Small Fortune in Spare Time! (Table of Contents: 3) (Expand) /

Trip to the Moon (Table of Contents: 4)

A Matter of Blood (Table of Contents: 5)

From Your Editor- To You! / letters page / 1 page (report information)

First Line of Dialogue or Text
Know one of the most fascinating sounds in the world?

Genre
fantasy-supernatural
Characters
Millie Boyce; Dick Boyce; Arthur Williams; Joe; Alice
Synopsis
In May 1953, Dick and Millie Boyce stumble onto a house hosting a strange New Year's party celebrating the arrival of 1957. After they leave, the house is struck by a plane. They run to the nearest home to report the incident, but when they return there is no evidence of the crash. Years later they are going to a New Year's party at the same house! They get all the people out before the plane, again, crashes into it.
Reprints

Retitled in Adventures into the Unknown reprint as "Happy New Year."

Information about reprint from FlashJay via the GCD-Main email list.