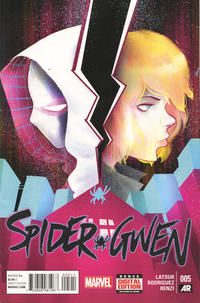 Recap and credits with illustrations from previous issues' stories.

Although Gwencils Down was intended to be a letters page this particular iteration focused on an afterword about the series finale with promo for Spider-Verse (Marvel, 2015 series). An email address was still given for letters to be used across other 'Spidey' series.