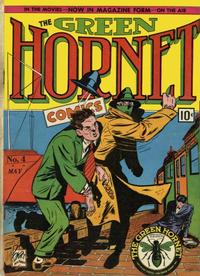 A Buzz from the Green Hornet (Table of Contents: 1)

Genre
superhero
Characters
Britt Reid; Hayashi Kato
Synopsis
A plea from Britt and Kato to all Green Hornet fans to help in the war on crime by obeying the law in everything they do and to always tell the truth: to parents, friends and to everyone.
Reprints

[Jake Saco and the Broken Bridge] (Table of Contents: 2)

[Theory of Crime] (Table of Contents: 4)

Genre
superhero
Characters
The Green Hornet [Britt Reid]; Kato [Haysahi Kato]; Mike Axford (Sentinel reporter); Sgt. Moran; Chin Chow (introduction); Pretty Willie Slone (villain, introduction)
Synopsis
Grim intrigue throws the oriental section of a city into a terrible Tong war and Britt Reid, as the Hornet, decides to investigate. He discovers that rival Tongs each have one half of a sacred tablet giving the location of a Chinese treasure to be used to rehabilitate China.
Reprints

This is the final appearance of the "Flying Trio" feature.

Feature surmised from character reference by Ted Watson, August 2010.
Unknown if there is an illustration.

Continued from last issue. The Dynamite reprinting does not have the actual page 4 of this story, but instead has mistakingly printed a page from a Green Hornet story found in Green Hornet #5.