The Iron Jaw shown is a robot and NOT the same villain who battled Crimebuster in Boy Comics. 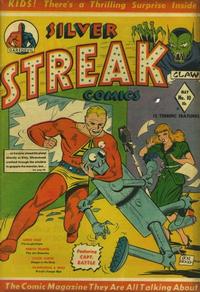 Genre
superhero
Characters
Daredevil [Bart Hill]; Empress of America; the Claw (villain)
Synopsis
After defeating Daredevil and taking over America, the Claw sees the underworld flock to him as willing and eager servants. Claw's first step is to take a bride and crown her as Empress of America, and, at her first celebration appearance, he vows to execute Daredevil!
Reprints

Genre
superhero
Characters
Lance Hale; the Nazis (villains, many die)
Synopsis
Having made his way from the Congo to the west coast of Africa, Lance is fishing when a Nazi sub surfaces and takes him prisoner. A U.S. merchant vessel causes the sub to sink and Lance escapes and is rescued by the vessel.
Reprints

Letterer credit added by Craig Delich 2012-12-8. The last panel states that the title of the next story is "Temple of Death".

First Line of Dialogue or Text
Well young man.. what's this...
Genre
humor; children
Characters
Duggie; Duggie's father; Duggie's mother; Mrs. Scott
Synopsis
Duggie's father chews him out for getting into a fight while trying to meddle in someone else's affairs and grounds the boy.
Reprints

Genre
superhero
Characters
Silver Streak [un-named taxi cab driver]; Whiz (pet Falcon); President Franklin Delano Roosevelt (cameo); Kitty Doyle (introduction); Iron Jaw I (villain, introduction, a robot, death)
Synopsis
Recovering from wounds suffered against Iron Jaw, Silver Streak leaves the hospital and visits Kitty Doyle to see if she can help him get back on the trail of Iron Jaw. When he hears the villain plans to attack a maker of armored trucks in Chicago, the Streak and Whiz go to the Windy City for a show down with the robot.
Reprints

This Iron Jaw is NOT the villain Crimebuster battled in Boy Comics.....this is a robot.

Genre
humor
Characters
Kelly
Synopsis
Officer Kelly, seeing the kids playing a dangerous game on the streets, decides to show them a safer game he used to play when he was a child.
Reprints

[The Beau's Masquerade] (Table of Contents: 8)

Genre
historical
Characters
The Pirate Prince; Merry; Zoong (villain, spy); The Beau (villain, death); Zara (villain)
Synopsis
The Beau, noting his resemblance to the Pirate Prince, captures the Prince and disguises himself as such, and takes over the Prince's ship. But his cruelty toward the crew members leads to a revolt, only ending when the real Prince returns and kills the villain in a swordfight.
Reprints

[The Time Camera] (Table of Contents: 9)

Genre
historical
Characters
Dan Dearborn; George Rogers Clark; Jerry; Scar-Face Dykes (villain); Indians (villains, many die)
Synopsis
Dan heads down the river to do battle with Scar-Face Dykes, who has been riling up the Indians against the white men.
Reprints
Keywords
Boonesboro

[Murder For Breakfast] (Table of Contents: 12)

Dissolvo is a color concentrate, the vibrations of which melt down nerve and bone tissue into a gelatinous mass.

Can You Answer These? / activity / 1 page (report information)

Can You Solve These? / activity / 1 page (report information)

Sequence added by Craig Delich 2012-12-9. In part, this story is a publisher promotion for Silver Streak Comics.

First Line of Dialogue or Text
I'm sorry, but Bucko asked me to the dance first!
Genre
humor; military
Characters
Bucko Private; Katie; Officer Blotz
Synopsis
To keep Bucko from having a date with Katie, Officer Blotz puts the Private on guard duty near an old cannon.
Reprints