Credit for cover letterer from Brian Lamken via the Error Tracker. 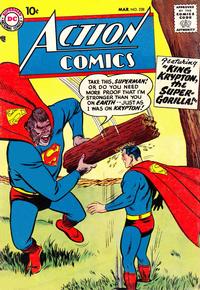 The Super-Gorilla from Krypton (Table of Contents: 2)

Genre
superhero
Characters
Superman; King Krypton; Jimmy Olsen
Synopsis
Jimmy summons Superman to Africa with his signal-watch when he encounters a gorilla with super-powers. Superman deduces that the giant ape is from Krypton, and later it sacrifices itself to save Superman from Green Kryptonite, revealing that it was really a Kryptonian human accidentally transformed into a gorilla.
Reprints
Keywords
gorilla; Green Kryptonite

Job Number
#3018
First Line of Dialogue or Text
You stay here and answer when I shout!
Genre
humor
Characters
Ollie

Marooned in the Fourth Dimension (Table of Contents: 7)

Genre
science fiction
Characters
Tommy Tomorrow; Prof. Jaxon ["Genius" Jones]; Space Looter
Synopsis
Tommy Tomorrow checks out Prof. Jaxon's dimension cabinet, a gateway to the 4th dimension. Since Tommy suspects the cabinet is a hoax, he volunteers to test the device and is sent to the 4th dimension. But Tommy doesn't realize that he has fallen for the real plot of the professor, who actually wanted to get rid of him. When Tommy realizes that things happen a day later in the 4th dimension, Tommy takes the place of that world's Tommy Tomorrow in testing that world's dimension cabinet and returns to arrest the professor and his accomplice.
Reprints

First Line of Dialogue or Text
So this is your uncle's funeral?
Genre
humor

The Tenderfoot Hunter (Table of Contents: 11)

Genre
jungle
Characters
Congo Bill; Janu; Caspar Quirt
Synopsis
Congo Bill must deal with a man on his safari who learned everything he knows about the jungle from a correspondence course.