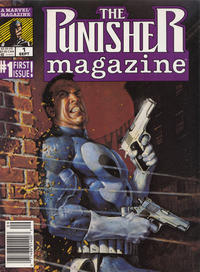 Circle of Blood Chapter One (Table of Contents: 3)

Zimelman paints over Zeck art. The illustration originally intended to be the cover was instead used as an on-sale poster. It was later used as cover for Magnum (Bladkompaniet AS, 1988 series) #12/1992. Zeck's web site (http://www.mikezeck.com/pages/checklist/marvel/marvel3/punisher/punisher.h…) indicates that he did not ink the pencils for publication.