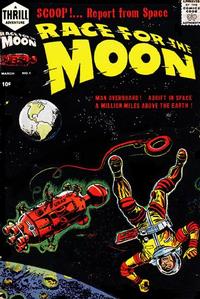 Report from Space (Table of Contents: 1)

Genre
science fiction
Synopsis
For thousands of years, an advanced planet had committed horribly insane people to a far-distant planet. But this time a mission is turned back by the now highly-advanced civilization on this distant planet: the planet Earth!
Reprints

First Man on the Moon (Table of Contents: 3)

A Thrill a Minute! (Table of Contents: 5)

House ad for Race for the Moon #1, featuring the cover (showing that alterations were made) and also reproducing part of the page one contents page.

Genre
science fiction
Characters
Sam Webb; Lou; three Martians
Synopsis
Sam Webb is a radio station owner and a very unpopular disc jockey who will not take himself off the air. He's so bad that Martians, out of frustration, arrive and forcibly remove him from his post.
Reprints

So You Want to Go to the Moon (Table of Contents: 8)

The Invasion (Table of Contents: 9)

Genre
science fiction
Characters
Bill; May; John Bronheit; General Pierce; alien conqueror
Synopsis
A couple watch a TV news broadcast chronicling an alien invasion and are terrified when Earth's military forces are quickly defeated. Fearing for their lives, they pack and literally run for the hills. They don't hear the news announcer then reveal that the invasion broadcast was an "original tele-screen drama entitled The Invasion From Mars!".
Reprints

The story is obviously inspired by Orson Welles' famous War of the Worlds radio broadcast that stunned listeners on Halloween in 1938.