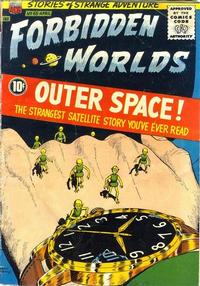 First Line of Dialogue or Text
The year: 1920---The place: Poland
Genre
fantasy-supernatural; war
Characters
Anton; Sofia; Valya
Synopsis
In 1920 in Poland, Anton and Valya are entranced by their little son with his distinctive white streak in his dark curls. One day he disappears and is never found. Years later Poland is invaded by the Nazis and Anton and Sofia are sentenced to death by shooting as members of the underground. The sergeant tasked with shooting them cannot do it even though he has executed dozens of others. He tells Anton and Sofia to hurry up and get out. He removes his helmet to wipe his brow and discloses a white streak in his dark hair.
Reprints

From Your Editor- To You! / letters page / 2 pages (report information)

No Place to Hide! (Table of Contents: 4)

First Line of Dialogue or Text
It was like a strange disconnected dream!
Genre
fantasy-supernatural
Characters
Charles Weldon; Mr. Ferris (Charles' boss)
Synopsis
Charles Weldon has worked for Ferris for 20 years but feels he has only been paid a pittance. Ferris leaves the building leaving Weldon alone. Weldon opens the safe and takes all the money. He tries to leave town but each method he tries, train, bus and plane, is stymied. Leaving the airport the mist swirls thicker and then he finds himself back outside his work. He puts the money back in the safe just as Ferris returns. Ferris is worried about the money but seeing Weldon is reassured. Ferris then tells Weldon that he has not treated him properly and will make him a partner in the firm.
Reprints

What's the Answer? (Table of Contents: 5)

First Line of Dialogue or Text
During the war in the Pacific, Lt Don Allison was shot down in flames---
Genre
fantasy-supernatural; war
Characters
Lt Don Allison; Doctor; Nurse; Destroyer Commander
Synopsis
The plane carrying Lt Don Allison crashes into the sea. Badly wounded he escapes in a rubber boat and is barely aware of being lifted onto the Hospital Ship Dakota. The Doctor and Nurse treat him and then arrange for his transferral. The next thing he knows is that he is back in his rubber boat being rescued by men from a destroyer. He tells his story to the Commander who tells him that the Dakota was torpedoed 2 months earlier. It's not possible for Allison to have been on board and yet he has bandages and dressings showing that he has had expert medical care!
Reprints
Keywords
Hospital ship; WW2

Return of a Hero! (Table of Contents: 6)

First Line of Dialogue or Text
Wait! I---I'm getting some sort of strange message---from the air itself!
Genre
fantasy-supernatural; war
Characters
Anton; Franz [Louis Kossuth]; Josef
Synopsis
In a cellar in 1956 Budapest, a group talk of rising up against the Russians but they need another Louis Kossuth. The Russians start the revolution by firing on a group of protesting workers. A protestor lies wounded in front of a tank. A man carries him to safety and then leads a group to steal more weapons. He tells them to call him Franz, leads them in more daring raids and exposes a Russian agent amongst them. The Russians bring more arms and Franz tells the group to flee and then disappears. The group realises that Franz looks just like Louis Kossuth without a beard and moustache.
Reprints

Louis Kossuth was a real person. According to Wikipedia:

Lajos Kossuth de Udvard et Kossuthfalva (19 September 1802 – 20 March 1894) was a Hungarian nobleman, lawyer, journalist, politician, statesman and Governor-President of the Kingdom of Hungary during the revolution of 1848–49.