The winners of the "All-Flash Quarterly" name contest were announced in this issue. George Robbins of Brooklyn, New York won the 1st prize of $10, Carol Stutz of Pewaukee, Wisconsin won the 2nd prize of $7.50, William Shelli of Chicago, Illinois won the 3rd prize of $5, and Esther Barros of Marion, Massachusetts won the 4th prize of $2.50.

Oddity: The lightning bolt on Flash's chest is backwards. 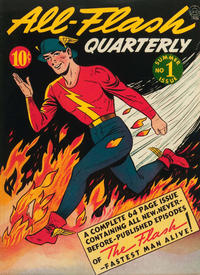 [Origin of the Flash] (Table of Contents: 2)

The Western University college science Professor's name was revealed in a later issue.

The origin of the Scarlet Speedster is recounted from Flash Comics #1.

[The Living Statues] (Table of Contents: 3)

The Flash Presents His Hall of Speed Records (Table of Contents: 4)

First Line of Dialogue or Text
I thought perhaps you readers might be interested in various sorts of speed records!
Genre
non-fiction; superhero
Characters
The Flash [Jay Garrick]; Glenn Cunningham; Equipoise (a horse)
Synopsis
Flash discusses actual speed records, such as for the Lockheed P-38, the Cheetah, the race horse Equipoise, miler Glenn Cunningham, and a comet.
Reprints

Boys & Girls: Meet the Author and Artist of The Flash -- Fastest Man Alive! (Table of Contents: 5)

Biographies and black and white photos of the Flash strip writer and artist, Gardner Fox and E. E. Hibbard, are featured.

The Adventure of "The Monocle" and His Garden of Gems (Table of Contents: 6)

[The Rodeo Racketeers] (Table of Contents: 7)

The Mayor of Mapletown (Table of Contents: 10)

First Line of Dialogue or Text
After snoopin' around fer days an' nights...
Genre
humor; crime
Characters
Butch McLobster; Webb; Flannel; Marx; Wright; Diller
Synopsis
Butch marks a house to later steal from, but, by the time he returns, the mark has been erased and Butch robs the wrong house.

[Menace of the Racket King] (Table of Contents: 13)