Since the Con is July, it's unlikely that the publication date, pricing or maybe even the page count would match to original.
This issue is a variant of Donald Duck (IDW, 2015 series) #1 / 368 [Cover A]. There exist further variants: 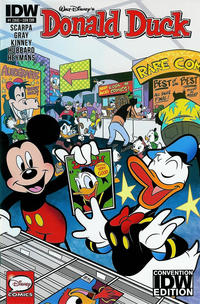 Genre
anthropomorphic-funny animals
Characters
Donald Duck; Huey; Dewey; Louie; Gideon McDuck
Synopsis
Donald is hired as a reporter on his Uncle Gideon's paper and assigned to locate and interview a foreign dignitary in the country for an international gourmet food show. But the dignitary is abducted by unknown agents, forcing Donald and his nephews to track the missing gourmet.
Reprints

Genre
anthropomorphic-funny animals
Characters
Donald Duck; Uncle Scrooge McDuck
Synopsis
In his job as conductor on a train, Donald must enforce the fare rules on everyone, even those in disguise.
Reprints

Do It Yourself (Table of Contents: 5)