Paths of Glory! (Table of Contents) 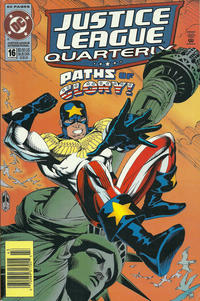 Visions of Glory (Table of Contents: 1)

Genre
superhero
Characters
General Glory [Joe Jones]; Guy Gardner; Donovan Wallace; Justice League America [Martian Manhunter (cameo); Fire (cameo); Guy Gardner (cameo)]; a street gang
Synopsis
Joe Jones is in the hospital after a heart attack and shares a room with Donovan Wallace. Donovan was a cop who is paralyzed by a bullet after protecting a young girl from a street gang. Joe comforts the young man with a retelling of his origin as General Glory, then begins to tell later, updated General Glory stories. Afterwards, Joe realizes his life is ebbing away. To keep Glory's path shining bright, he bestows his powers on Donovan, whose full mobility is restored. As Donovan becomes the next General Glory, Joe passes away quietly.

I Fought Groout, the Creature Who Came from the Cracks in the Earth! (Table of Contents: 2)

Genre
superhero
Characters
General Glory; Commodore Pasternak; Ernest E. Ernest [Ernie] (the General's young ward); unnamed campers; Groout
Synopsis
Joe Jones hears a fantastic tale of a monster coming from the center of the Earth from Commodore Pasternak at the Megolopolis's Explorers Club. Determined to join the club, Joe journeys to the outskirts of town and meets Groout, a huge monster bent on conquering the earth. Only Joe -as General Glory- can prevent this.

This story is a homage to the Monster comics done by Marvel Comics in the 1950s and 1960s.

Genre
superhero
Characters
General Glory [Joe Jones]; Ernie [Ernest E. Ernest]; Mavis Morgan (an investigative radio reporter); "Moolah" Murphy (a criminal); "Moolah's" unnamed henchman; Inspector McLaughlin; Benny Lenox and his gang (rivals of "Moolah" and his gang)
Synopsis
Joe and Ernest have a radio interview with Mavis Morgan interrupted by "Moolah" Murphy, a mobster who's going straight. Its up to Joe and Ernest -- as General Glory and Ernie -- to find out the truth.

This story is a homage to both Batman and Superman stories of the 1950s and 1960s: it has Batman's set up with Superman's supporting characters.

Return on a Dark Night (Table of Contents: 4)

This is a homage to Frank Miller's "The Dark Knight Returns" story.

The Power... and the Platitude! (Table of Contents: 5)

Genre
superhero
Characters
The Wildbloods [Strykeheart; Wingstarr; Platoon; Thudd; Stones]; General Glory; Ernie
Synopsis
The Wildbloods-- a new group of heroes for this generation-- are assigned to open two cryogenic tubes holding the living legends of World War II: General Glory and Ernie! But 30 years of stasis has left the two confused and they believe the Wildbloods are attacking them. Can the Wildbloods convince them otherwise before someone gets killed-- or worse?

This story is inspired by the Image books of the 1990s, specifically Youngblood.