[The Search for the Zodiac Stone Begins] (Table of Contents) 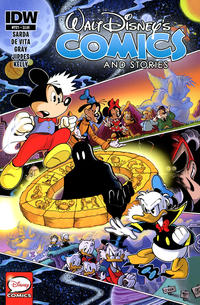 The Search for the Zodiac Stone, Chapter 1: The Secret Society (Table of Contents: 1)

Translator and American English dialogue provider Jonathan Gray linked this issue’s Italian-produced Mickey Mouse installment to the "Fantastic Time Machine" Mickey Mouse sub-series of stories from the later 1960s. This sub-series, by creators Carl Fallberg and Paul Murry, allowed Mickey and Goofy to have adventures in various time historical periods via said time machine. Gray’s script reveals the individuals behind Mickey and Goofy’s journeys through time, which was never addressed in the Fallberg and Murry stories.

First Line of Dialogue or Text
Those bees are so busy I'm getting quite dizzy!
Feature Logo

Job Number
H-8006
First Line of Dialogue or Text
But what does a bookmaker's runner do, Unca Donald?
Feature Logo

Gremlin Gus and the Widgets (Table of Contents: 4)