The Hunter from the Future! (Table of Contents) 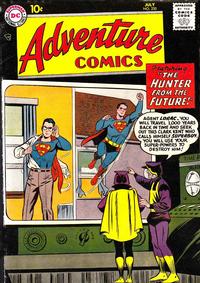 Are You a Litter-Bug? (Table of Contents: 1)

Genre
superhero
Characters
Superboy [Clark Kent]; Lorac-K7; Pa Kent; Ma Kent; Prof Lang; Mayor Brook; Principal Sands; Lana Lang; Inspector Edaw-8; Mr. Carr
Synopsis
A criminal from the 30th Century comes to Smallville to get Cobalt to build a cobalt bomb, and disguises himself as a local resident and Superboy has to figure out which one.
Reprints

Original version shows Clark watching TV. In the 80-Page Giant reprint, Clark receives pictures from the future on the radio.

Story retold from the Superman newspaper strip: episode 103 -- "The Impostor from the Year 3004."

First Line of Dialogue or Text
Lisa is giving up her movie career to get married!
Genre
humor
Reprints

["Three seven-letter words can be spelled, using all seven letters in each word!" (TNGIDIE)] (Table of Contents: 6)

The Green Arrows of the World (Table of Contents: 7)

DC credited the script to Bill Finger in The Green Arrow by Jack Kirby and The Jack Kirby Omnibus #1 reprints, but they credit Dave Wood in the Showcase Presents Green Arrow #1 reprint. The GCD writing-experts' consensus is that Wood is the most-likely candidate, but Herron is possible, and Finger is also possible, but the least-likely of the three.

First Line of Dialogue or Text
A snail has about 14,000 teeth!
Genre
non-fiction; animal
Reprints

The Guinea Pig of the Sea (Table of Contents: 10)

For the Best in Comics Entertainment (Table of Contents: 14) (Expand) /