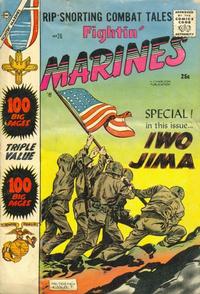 The Planning Stage (Table of Contents: 1)

The Convoy's Long Road to Iwo Jima (Table of Contents: 2)

The art was formerly attributed to Maurice Whitman. This story is crudely re-purposed from an original not at all about Iwo Jima, but rather an "historical" piece about the fleet assembled for the 1942 Operation "Torch" landings in North Africa. Visually there is exactly one image in five pages that has anything to do with the Pacific War, and that's the Red Sun logo on a submarine being sunk on page four, but the submarine itself is indistinguishable from the German sub sunk on page one. The rest of the backdrop is all clearly the Atlantic. The story references a fleet gathered from New York, Boston, and Norfolk to join an already assembled invasion fleet--that didn't happen at Iwo Jima--the only time a partial invasion fleet sailed direct from the US was in Operation Torch. There is a sub-plot about needing fuse casings and having them flown to the fleet en route; this actually happened in Operation Torch. In several cases the repurposing of captions or word balloons is clearly evident. The word "Japan" on page one is written in a different hand than the rest of the words in the balloon, and several word balloons on page three that reference "Japs" have suspicious amounts of extra white space in them, indicating production changes in the lettering. Finally, the story stops short of showing the actual bombardment and a separate two-page story (see "The Softening Up" below) had to be added to cover that. In fact, the final page of the original Ken Battefield illustrated story probably appears as a one-page story in Fightin' Navy #83 (March 1958) as "Bombardment--H-Hour -1!" A comparison of the "The Softening Up" and that story reveals narrative similarities greater than chance would allow; the original ending of the main story had to be dropped because there were no specific references to the Pacific War, and the final invasion scene is clearly US Army, not US Marines hitting the beach. This very crude re-purposing of this story (and the insertion of the "The Softening Up") probably became necessary when a seven-page story originally planned to fit into the Iwo Jima sequence was grabbed at the last minute to fill a hole in another book going to press earlier (which was may have been Attack #54).

The Softenin' Up (Table of Contents: 3)

The Japanese Defense and Weapons (Table of Contents: 4)

Making a Marine (Table of Contents: 8)

The second page has a statement of ownership and management.

This story appears to be the closing segment of a much longer story presenting the "history" of the Civil War that Charlton inherited in the back inventory purchased from Magazine Enterprises, drawn by Check, based on a script from an unknown author. The lettering, panel bordering/composition are consistent with ME war titles such as "Tell it to the Marines." The very first installment of this "epic" probably appears as "Brother against Brother" in Charlton's Attack #54 (1958); another installment may well have appeared as "The Fighting Man" in Atlas's Battlefront #43 (November 1956), although if so the Atlas staff did a significant amount of production work to make it more consistent with the general look of the comic. No other parts of the longer work have either been tentatively or positively identified.