Credits for this issue based upon Alberto Becattini's "Disney Index - Dell Comic Books" Vols. 1 and 2 (Italy, 1992 and 1994). Based on the 1957-59 ABC TV series Zorro. Seventh Four Color issue to feature the character Zorro; first of seven Four Colors to feature Walt Disney's Zorro. 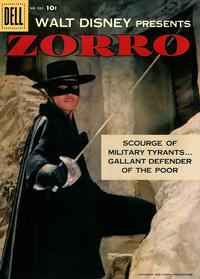 Genre
western-frontier
Characters
Zorro [Don Diego de la Vega] (introduction, origin); Tornado (Zorro's horse); Bernardo (Diego's family servant); Don Alejandro de la Vega (Diego's father); Don Nacho Torres (land owner); Sergeant Demetrio Lopez Garcia; Capitan Monastario (villain); Licenciado Pina (villain, a lawyer)
Synopsis
In 1820, Don Diego returns home from Spain at his father's request, due to the tyranical rule of the pueblo's new Commandante. He decides on the trip over to adopt the guise of a fox to diffuse suspicion from himself when he becomes a man of action, and that his servant will play the part of a deaf and dumb man in order to gather vital information. After listening to his father's recounting of the events on-going in the pueblo, Don Diego decides on a secret course of action to fight Monastario: as Zorro, the Fox! His first assignment is to free a local landowner from false imprisonment.
Reprints

Toth was very unhappy having to work from adaptations of the TV shows' scripts, which he felt had too much dialogue and not enough action. In order to tighten up the storytelling, he deleted unnecesary dialogue and cut redundant captions wherever possible, which did not go over well with the Editor.

The First Vaqueros (Table of Contents: 4)

Along Zorro's Trail (Table of Contents: 5)