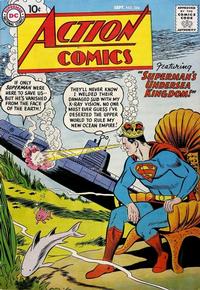 The Super-Merman of the Sea (Table of Contents: 2)

Inks previously credited to Stan Kaye, but most likely not him. Probably John Giunta, per Christopher Melchert. Carl Gafford suggested via the GCD Error Tracker that John Forte may be the inker, but Bob Hughes points out that Forte didn't start inking Swan until 1960.

First appearance of the Undersea Fortress of Solitude.

Know Your Pet! (Table of Contents: 4)

Genre
advocacy
Synopsis
Jimmy tries to treat his dog like a poodle, not realizing that different pets need different care.

First Line of Dialogue or Text
This looks like a good spot to sell!
Genre
humor
Characters
Shorty

The Riddle of the Roc (Table of Contents: 6)

The Mystery of the Three Space Rookies (Table of Contents: 12)

Genre
science fiction
Characters
Tommy Tomorrow; Planeteers; Xixxor of Venus; Kjpxwq of Jupiter; Gol of Mars
Synopsis
Three cadets outperform Tommy in a series of tests, but he learns that they are from other planets, trying to determine who is the best of the Planeteers.