Art information told by Don to his son and posted on Don's official website http://deadwax.net/donrico/index.html 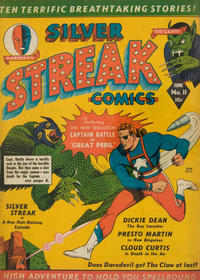 Genre
superhero
Characters
Captain Battle [Jonathan Battle]; Jane Lorrain; The Black Dragon (villain); Deaglos (villains, birdmen of the Dragon)
Synopsis
Jonathan is taken by surprise by the Deaglos in his laboratory, but falls unconscious through a trap door unseen. However, the strange birdmen succeed in securing some of Battle's inventions and kidnap Jane for good measure so that she can become the Queen for the Black Dragon.
Reprints
Keywords
Curvoscope; Dissolvo; Luceflyer

Genre
superhero
Characters
Daredevil [Bart Hill]; Tonia Saunders; The Claw (villain); Lucifer the Genii (villain, introduction); Genii's monsters (villains, many die)
Synopsis
Frustrated by defeats at the hands of Daredevil, the Claw ventures to the inferno to seek Lucifer's aid against Daredevil. Lucifer agrees with one condition: if Daredevil wins again, then the Claw will be banished into Asia forever.
Reprints
Keywords
The Claw's Monastery

Writer and artist credits added by Craig Delich 2013-1-8. This page also includesa Silver Streak Portrait Certificate, and an illustrated spot ad for a picture ring for sale for 48 cents.

Genre
historical
Characters
The Pirate Prince; Snad (a shipmaker); Bok (villain, King of the slave smugglers, death); Pete (villain); Marp (villain)
Synopsis
Bok forces a local shipmaker to construct a special ship for his use in slave smuggling, but when he refuses, all of the shipmaker's fleet is destroyed by fire. He then agrees to build the ship with a double hull, that will effectively hide the whereabouts of slaves aboard the ship.....or so it is thought!
Reprints

Genre
adventure
Characters
Dickie Dean; Zip; Pete Tagle; Jackie Tagle; Professor Skinn [aka Professor Skin] (villain); Blubber (villain)
Synopsis
After saving the life of a young boy with his Sky Bug, Dickie speaks with the boy's father and comments that there is no safe play area for children in the community. When Dickie suggests using the old amusement park grounds as a possible site, Mr. Tagle gives the property to Dickie to fix up. However, the evil Professor Skinn intends to stop such efforts.
Reprints
Keywords
Balloon Bus; Fire Gun; the Octopus; The Sky Bug

Credits suggested the Who's Who.

The last 1/4th of the page is an illustrated invention section, where Dickie asks readers to send in their invention ideas. One such invention, an Air Pressure Boat, sent in by reader Michael Dubroff from Brooklyn, is shown.

First Line of Dialogue or Text
Deep in the African wilderness, Lance Hale...
Genre
adventure; jungle
Characters
Lance Hale; Nellie Lee; Bill; natives (villains, some die); "Great One" (villain, a man-eating rat, death)
Synopsis
Lance follows natives and their kidnapped female back to a temple in the jungle, where she is to be sacrificed. Saving her from several perils, Lance and Nellie head back to her expedition.
Reprints

Last panel promo tells of Lance battling "The Missing Link" in the next issue.

Can You Answer These? / activity / 1 page (report information)

Synopsis
Nine illustrated puzzlers are given for the readers to answer, plus there is seven question intelligence quiz. All answers are provided.
Reprints

Can You Solve These? / activity / 1 page (report information)

The Ghost of the Domino (Table of Contents: 11)

Genre
adventure
Characters
Presto Martin [also as Domino and Scarface Klein]; Sergeant Murphy (Policeman); un-named Police Commissioner; Daredevil [Bart Hill] (image in newspaper); Domino (villain, death); "Lucky" Rica (villain, death); Slug (villain); Scarface Klein (villain); Pete Poulos (villain); Trigger Annand (villain)
Synopsis
Before Domino went to the chair for his crimes, he threatened to come back and get his revenge on those who turned state's evidence on him. Presto sees a case in the making when three of the witnesses are murdered. When Martin and Murphy check on Domino's grave, it is empty, and Martin smells a rat: a member of Domino's gang, looking to kill off Domino's gang members in order to help himself to money Domino had stashed away.
Reprints

Genre
historical; western-frontier
Characters
The Silver Ranger; Lucifer (Ranger's horse); Sam Leonard (prospector, death); Sally Leonard (Sam's daughter); un-named Sheriff; Slim Barker (villain)
Synopsis
The Ranger comes across a prospector who has just been fatally shot, but before he dies, he gives the Ranger a map to his gold mine that he had staked in his daughter's name. The Ranger tracks the killer to the town saloon and confronts him as the cur asks the saloon keeper to lock up two bags of gold dust. Out-numbered, the Ranger dashes out of the saloon right into the Sheriff, who, along with his deputies, rounds up Barker and the others.
Reprints
Keywords
Pine Gulch; Rocky Ford Palace Saloon

Genre
aviation
Characters
Cloud Curtis; "Crusher" McCoy; "Pop" Whistler; Scissors (villain, death); Spike (villain, death)
Synopsis
Cloud must battle the threat of an international spy organization, who has sent their aircraft, termed The Ripper, to attack Army flying students. Cloud, Crusher and Pop attack the Ripper, but that plane's strong magnet holds the Golden Bullet in place and returns the aircraft to the spy's headquarters, from which Cloud and friends break out of their prison, man their plane and destroy the Ripper and crew.
Reprints
Keywords
Golden Bullet; The Ripper

First Line of Dialogue or Text
White savage!! More cruel, more bloodthirsty, more dreaded than the redskins!
Genre
historical
Characters
Dan Dearborn; Jerry; Simon Girty (villain); the Indians (villains)
Synopsis
Dan and Jerry come upon a village in flames after an Indian raid and learn from one of the dying settlers that white men, led by a man named Girty, egged the Indians on to make the attack. Dan becomes a captive of the Indians and is slated to be burned at the stake when Girty shows up and Dan uses a ruse to save his life.
Reprints

Mercury changes his name to Meteor in the next issue.