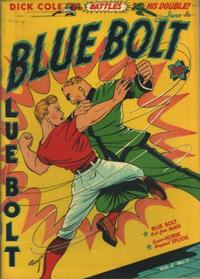 Title taken from the cover.

The story is complete, but the background story continues to the next issue with a different title.

[Murder in the Mountains] (Table of Contents: 3)

Genre
adventure
Characters
Sub-Zero Man; Harkness (introduction); Ruth (hiker, introduction); Harkness (introduction); The Twister [Bob Sanders] (cameo); Ragin (villain, nephew of Harkness, introduction, death)
Synopsis
Sub-Zero is taking a break at Mt. Reed from crime fighting and spots a hiker falling from a mountain. Upon investigation, he notes that the hiker's rope had been doctored to break and suspects a man named Ragin. After a tussel, Sub-Zero is knocked out, then sets out after Ragin. While doing so, Sub-Zero fractures his leg but manages to inscribe a message on stone that he hopes will be picked up, read, and result in a posse finding him and Ragin. Ragin, loaded with dynamite, falls to his death, knocking Sub-Zero and the posse off a mountain, but are saved by a mysterious wind (The Twister).
Reprints
Keywords
Mt. Reed

[The Case of the Yellow Creek Dam] (Table of Contents: 4)

[The Revenge of Rock Rook] (Table of Contents: 6)

Vincennes and Victory (Table of Contents: 7)

[The Aerial Saboteur] (Table of Contents: 11)

Genre
superhero
Characters
Blue Bolt [Fred Parrish]; Kip Parrish (Fred's brother); unnamed Major (base commander, introduction); The Twister [Bob Sanders] (cameo); Miller (villain, saboteur, introduction, death)
Synopsis
At a Canadian R.A.F. air base, Blue Bolt watches his kid brother's first solo flight and sees the plane cracking up. When Kip's chute doesn't open, Blue Bolt springs to the rescue. Kip later discovers a man named Miller sabotaging the planes, and is knocked out. Later, the base commander is kidnapped by Miller when the Major discovers the sabotage and it is Blue Bolt to the rescue again, over-taking the airplane and causing Miller to fall to his death. But when the plane itself streaks to the earth out of control, a mysterious wind (The Twister) comes along and brings the plane down safely.
Reprints

As of this story, Kip still does not know that Blue Bolt is his brother.

Introducing the Twister (Table of Contents: 12)

The Twister/Bob Sanders is considered to be a descendant of Odysseus.

At the end of the story, Twister announces to the crooks that he has a date with the notorious Tony the Tornado, a blurb to indicate the topic of the story next issue.

The Target / promo (ad from the publisher) / 1 page (report information)