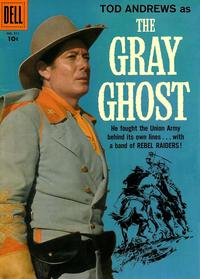 Photographs from the television show.

Point of Honor (Table of Contents: 2)

In his interview in The Art of Al Williamson (Pacific Comics, 1983 series), George Woodbridge states he was the artist on Gray Ghost. Woodbridge stated he consulted with John Severin on what kind of uniforms, guns, and other items to use in the artwork (information via Stephen Palmer via the GCD Error Tracker # 11773, reported 3 August 2018).