I Was a Teen-Age Superboy! (Table of Contents) 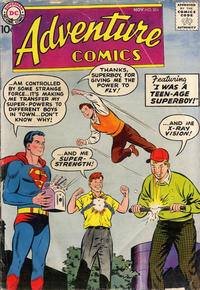 I Was a Teen-Age Superboy (Table of Contents: 2)

First Line of Dialogue or Text
And stay there until I tell you to come out!
Genre
humor
Reprints

The Menace of the Electric Man! (Table of Contents: 6)

Genre
superhero
Characters
Electric Man
Synopsis
An escaped convict finds himself immune to electric shock. During storms at sea, the "Electric Man" gathers lightning bolts to rob ships. Aquaman is helpless to stop him until he remembers a particular cargo...

Look to the Stars! (Table of Contents: 8)

First Line of Dialogue or Text
Gosh Bob, we're lost! What do we do now?
Genre
advocacy; math & science
Characters
Bob; Ted
Synopsis
Bob and his friends are saved from being lost in the woods because Bob knows how to find Polaris, the North Star.

Appeared across a range of DC comics in November/December 1958.

First Line of Dialogue or Text
I can't get a raise in pay from the boss.
Genre
humor

First Line of Dialogue or Text
He's duded up to go the the haymaker's jig!
Genre
non-fiction
Reprints