The Riddle of Robert O'Malley! (Table of Contents) 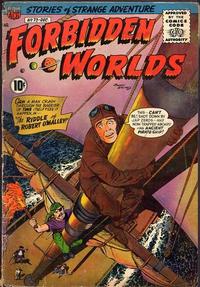 Genre
humor; superhero
Characters
Herbie Popnecker; Pincus Popnecker; Mrs. Popnecker; Senator Stevens
Synopsis
Herbie's father thinks his son will never amount to anything or do anything. Herbie goes to the zoo where he takes on a tiger. Then, he saves Senator Stevens who is lost at sea. Finally, he stops an alien invasion.
Reprints

This story is the first appearance of Herbie and features his peculiar way of flying and his ability to talk to animals and aliens. Herbie looks and talks differently in this pre-Herbie-series story. Herbie's pants are a slightly different blue than the rest of the Herbie stories.

From Your Editor- To You! / letters page / 2 pages (report information)

The Riddle of Robert O'Malley (Table of Contents: 5)