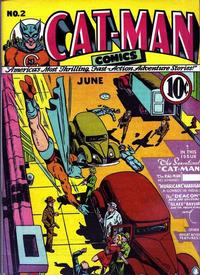 [The Missing Ambassador] (Table of Contents: 1)

Genre
superhero
Characters
The Cat-Man [David Merrywether]; Henri Lavarr (Rodalia ambassador); two un-named Rodalian officials (villains)
Synopsis
David overhears two Rodalian officials congratulate each other on the kidnapping of their ambassador, an act which will result in war within 30 hours, and for which, the two officials will be richly rewarded by the Axis powers. Learning that the ambassador is being held on Clearrock Island under heavy guard, the Cat-Man heads out to rescue him and avoid a war.
Reprints

The Dolls of Death (Table of Contents: 2)

Blaze Baylor and the Arson Ring (Table of Contents: 3)

First Line of Dialogue or Text
High on an unknown mesa somewhere in the West...

First Line of Dialogue or Text
Hank Harrigan, born and raised in the Texas panhandle...

Characters
Ragman [Jay Garson, Jr.]; Paul Duval (surgeon)
Synopsis
A valise with two million dollars worth of jewels is smuggled into the U.S. by dropping it into the harbour.

Art with long nosed faces is identical to Willner's signed Devil Dogs story in this issue.

Lipowski is credited on this feature by Jerry Bails' Who's Who, and the art is similar to his signed Captain Storms story in Holyoke One-Shot #2.

[The Magneto-Ray] (Table of Contents: 9)