The Man No Prison Could Hold! (Table of Contents) 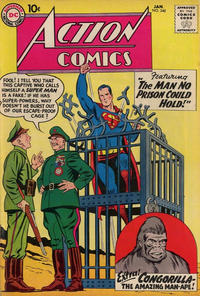 The Man No Prison Could Hold! (Table of Contents: 2)

First Line of Dialogue or Text
We want you to go up and crash...
Genre
humor
Characters
Tricksy

Formula for Success! (Table of Contents: 5)

Genre
advocacy
Synopsis
Jimmy is a talented musician, and his science teacher convinces his dad that he would he happier pursuing music rather than science.

The Amazing Congorilla! (Table of Contents: 6)

Continuation of the Congo Bill feature.

The Graveyard of Space (Table of Contents: 12)

Genre
science fiction
Characters
Tommy Tomorrow; Brent Wood; Lor-Li
Synopsis
Brent falls in love with a beautiful girl who helps to guide the Planeteers' ship out of a deadly spiral nebula, but she turns out to be a giantess.