This issue includes 10 pages of paid advertisements (pages 2, 9, 15, 19, 25, 27, 33-36 of comic including inside front cover, inside back cover and back cover); pages of comic not numbered. All new stories in this issue are narrated in the first person.

I Found the Ninth Wonder of the World! (Table of Contents) 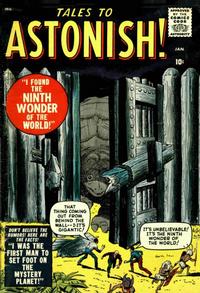 We Found the Ninth Wonder of the World! (Table of Contents: 1)

Job Number
T-83
First Line of Dialogue or Text
We searched for a forgotten man in forgotten waters--and the trail turned up...
Genre
science fiction
Characters
Captain Kane; Simmons; Professor Briggs; Doctor Parker; "Experiment 247"; "Experiment XYZ"
Synopsis
An expedition in remote waters finds a missing scientist who has used serums to create giant turtles, one the size of a house, the other the size of an island.
Reprints

Job number from Dr. Michael J. Vassallo via the Atlas/Timely discussion group. Story is pages 3-8, 10 of comic (pages of story numbered 1 to 7).

I Know the Secret of the Poltergeist! (Table of Contents: 2)

Job Number
T-84
Genre
fantasy-supernatural
Characters
Larry Winters; Rita Winters
Synopsis
An investigator works diligently to discover the logical explanations behind the odd occurrences at a couple's newly purchased home. He is, in fact, a poltergeist who attempts to allay suspicion of his kind's existence among humans.
Reprints

Job Number
H-366
First Line of Dialogue or Text
The city suffered under the onslaught of the summer's first heat spell.
Genre
science fiction
Characters
John Tyler; Mary Tyler; Bobby Tyler
Synopsis
When a young boy builds a fan to help his family get through a heat wave it brings down the flying saucer that caused the heat.
Reprints

Text story with illustrations. Artist credits from the record of Journey Into Mystery #44. Text story is pages 18, 26 of comic (pages of story not numbered).

I Was the First Man to Set Foot on...the Mystery Planet! (Table of Contents: 4)

Job Number
T-85
First Line of Dialogue or Text
My visit to the mystery planet started out as a business venture!
Genre
science fiction
Characters
Hank Jordan; Tom Jonson; Azka
Synopsis
A businessman bigoted against robots tries to make a deal to tap the resources of a planet rich in exploding pools of radioactive oil. The natives refuse to sell their oil, since they are robots and it is too vital to them.
Reprints

I Foiled an Enemy Invasion! (Table of Contents: 5)

Job Number
T-82
First Line of Dialogue or Text
It was too incredible to believe!!
Genre
science fiction
Characters
Mark Briton
Synopsis
Mysterious billboards appear, each bearing a picture of an alien soldier. A newspaperman realizes just in time that the billboards are an attempt by a two-dimensional alien race to hide an invasion.
Reprints

Job number from Dr. Michael J. Vassallo via the Atlas/Timely discussion group. Story is pages 28-32 of comic (pages of story numbered 1 to 5).