Concluding the Origin of Spider-Man 2099 (Table of Contents) 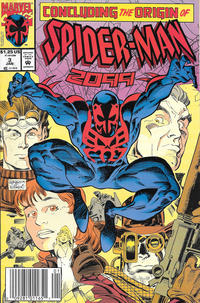 Nothing Gained (Table of Contents: 1)

Genre
superhero; science fiction
Characters
Spider-Man 2099 [Miguel O'Hara]; GUESTS: Thorites (followers of Thor); Gabriel O'Hara; VILLAINS: Venture; Tyler Stone
Synopsis
Miguel fights Venture after he kills a Thorite, then leads him on a merry chase, but is captured. He breaks free and finally defeats Venture. In the meantime, Gabriel figures out that Spider-Man is his brother.
Reprints

In addition to talons on hands and feet that allow him to scale walls, Miguel learns that he also has super-strength and can shoot webbing from his forearms.