Jeff Raye's female companion does not appear in the story within. 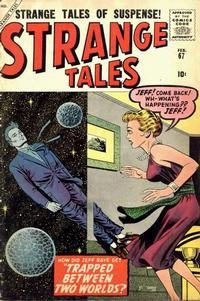 Job Number
T-99
Genre
science fiction
Characters
Jeff Raye; Butch; Noki
Synopsis
A scientist working on a matter transporting device accidentally transports himself to a distant planet of warlike aliens. They read his mind in order to use his device for conquest. He steals back their record of his thoughts and escapes back to Earth, where he destroys his machine to prevent anyone using it to invade.
Reprints

I Seek the Sea Serpent (Table of Contents: 2)

Job Number
T-116
Genre
science fiction
Characters
Prof. Efrem Marsh
Synopsis
A scientist tracks down a sea serpent, but the crew of his ship panics and kills it. When they try to recover the creature's body they discover that it was an alien trying to communicate with humans after crash landing on Earth centuries ago.
Reprints

I Was the Invisible Man! (Table of Contents: 3)

Job Number
T-97
Genre
science fiction
Characters
Adam Clayton
Synopsis
A scientist uses a device that makes the particles of a living body move at the speed of light, rendering him invisible to the eye. He conducts a series of stunts in order to build up a name for himself so he can them go public and cash in. After forty days he glances into the mirror and realizes that he has aged forty years during that time due to a side effect. He realizes with the little time left to him that he can no longer use his knowledge for selfish gain.
Reprints

Narrated in the first person. Adam Clayton was mentioned in Marvel Universe (1998 series) which places this story in Marvel continuity. Story is pages 16-18, 20-23 of comic (pages of story numbered 1 to 7).

Text story with illustration. Text story is pages 24, 26 of comic (pages of story not numbered).

The Man Who Never Was! (Table of Contents: 5)

Job Number
T-114
Genre
science fiction
Characters
Prof. Philip Atherton; Eric Bohn
Synopsis
A scientist's assistant uses a time machine to travel to the past in order to find a pirate's treasure and get rich. While in the past he is attacked by the pirates, and unknowingly kills one of his own ancestors, erasing his own existence.
Reprints

Narrated in the second person. Pencil and ink credit of Bob Forgione changed based on information from Tom Lammers and the Atlas/Timely discussion list. Story is pages 28-32 of comic (pages of story numbered 1 to 5).