Distributed to newsstands in November 1958. This issue includes 10 pages of paid advertisements.

From GCD Error #5411 (20 November 2010), Tom Orzechowski states there is a stylization similarity to this cover and and the splash page to Tales to Astonish (Marvel, 1959 series) #2,
"The cover shows a solid stylistic similarity to the splash page in Tales to Astonish #2's story "I Spent Eternity in a Deep Freeze." That story is credited to Bob Forgione. ...Toward center right, just this side of the control room, there's detailing that follows the curvature of the gated window for no reason at all, and otherwise is inconsistent with its own angles. Likewise, there's wainscoting, a view screen and some rivets just behind the blurb, on an angle and level inconsistent with the control room immediately above."

Previous indexer and Nick Caputo believe pencils and inks to be by Carl Burgos.

Saltarella previously credited John Severin on inks based on the broken fine linework in the background but Nick Caputo sees no evidence of his work. 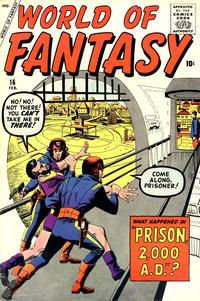 Job Number
T-121
Genre
science fiction
Characters
Col. Ken Travers
Synopsis
Earth is terrified by the approach of a giant planet, but a military expedition finds that time moves more slowly on this planet, so they will not notice Earth.
Reprints

Narrated in the first person. Set in the year 2500.

Job Number
T-123
Genre
fantasy-supernatural
Characters
Claude Hicks
Synopsis
A man with hay fever releases a hostile genie with plans of conquest from a lamp, but the genie contracts hay fever from his liberator. The genie tries to go to different areas, but after so long in the lamp, he has no resistances to germs and pollen. He decides he was better off in the lamp.
Reprints

Worlds within Worlds! (Table of Contents: 4)

Job Number
T-130
Genre
science fiction
Characters
Paul Stratton; Terry Mason; Dr. Stone
Synopsis
A scientist is convinced that there are microscopic worlds inside microbes. He cannot find one, but if he'd have kept looking then he would have found Earth.
Reprints

Narrated in the second person.

Beware the Future! (Table of Contents: 5)