The Runaway Space-Train! (Table of Contents)

Pencils and inks credits from Julius Schwartz's editorial records, provided to the GCD by DC Comics.

Ink credit was originally Joe Giella however the records state that Giacoia was paid for the inking. Giella often ghosted for and/or assisted Giacoia and vice versa. 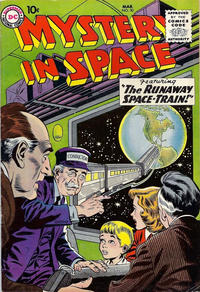 The Runaway Space-Train! (Table of Contents: 2)

First Line of Dialogue or Text
Our train is going to land on this planet--outside our solar system!
Genre
science fiction
Characters
Bobby; Nell (Bobby's mother); Bobby's father; Mrs Alson (old lady passenger); Vectus (friendly alien)
Synopsis
A group of humans on a train are transported across the universe to Almoran. At the same time a group of Almoran aliens are sent to Earth disguised as Earthlings. The humans and Almorans are flashed by a ray from an enemy spaceship causing the Almorans to fall asleep. The humans pretend to be asleep and then defeat the attackers. The Almorans reward the Earth people by allowing them to keep their memories of the adventure but place a mental block on them to prevent them from talking about it.
Reprints
Keywords
railroads; spaceship; trains

The Family Favorite! (Table of Contents: 6)

First Line of Dialogue or Text
Why that Earth-city shows no color on your television screen! It receives only in black and white!
Genre
science fiction
Characters
Daryl Halbert
Synopsis
Daryl Halbert records the albedo (reflectivity) of planets. He receives a message to return to Earth quickly. His spaceship is damaged on his way back and he is rescued by aliens. He is told that they are on their way to Earth to destroy it! Earth's albedo is falling and when it reaches zero it will break free from the Sun and become an undetectable space menace. Halbert asks for time to find a cure and is given 7 hours. He discovers that Earth has a covering of glassy space dust. A test bomb clears a small hole and proves that the Earth, and other planets in the future, can be saved.
Reprints

Information for this sequence from Arthur Lortie. Location in this issue from Ed Boner.

First Line of Dialogue or Text
Out among the nine solar system planets, in the 22nd century, goes the interplanetary broadcast of the space-disc-jockey, playing requests...
Genre
science fiction
Characters
Bruce Carlton; Gloria (Bruce's girlfriend); Clark Hale (space-disc-jockey); Cyrus Crane; "Orion" Batson (interplanetary outlaw)
Synopsis
Bruce Carlton has arranged for Clark Hale to play a song for Gloria on the radio. Hale plays a song that insults Gloria. Carlton goes to Hale's studio but it is empty. Carlton deduces that the catalog number for the record relates to an asteroid. There he finds Hale trapped in a crater. Hale tells him that Cyrus Crane loved his music and left him treasure buried on the asteroid. "Orion" Batson overheard everything except where the burial spot was and took him to the asteroid. Carlton and Hale burrow underneath and take the treasure before Batson can. Later Hale plays a proper song for Gloria.
Reprints
Keywords
asteroid; spaceship