Regular cover is an original cover by Casty for this edition. 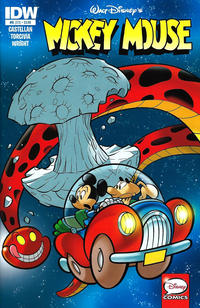 Thanks to the eccentric Eega Beeva's future-tech, Mickey’s car becomes capable of space flight and is powered by rock and roll music. In the original Italian printing, actual rock and roll music lyrics were used to illustrate this. The lyrics used in the Italian version of this story were printed in English, while the rest of the script was in Italian. For the American printing, the actual lyrics were swapped for parody lyrics created by the translator, after a discussion with the archival editor. In that same vein, a reference to Elvis Presley in the Italian version (page 16, panel 5) became “Shoeless Pashly”, an Elvis parody character-name created by Carl Barks for Uncle Scrooge #20 (1957). “Roddencone” was an eye-pun name tribute to Gene Roddenberry. Galacius Greymatter, who created Percy the planet-eating space-worm, was named for another famous planet-eater, Galactus, with only a one-letter deviation.

First Line of Dialogue or Text
Oh, gawrsh… There he is, an’ I still don’t have all the toys out!
Genre
anthropomorphic-funny animals
Characters
Goofy; Mickey Mouse; Gilbert (first appearance); three citizens named “Gilbert”; three scientists; quiz show host; four kids
Synopsis
Goofy worries that he won't be able to hold the interest of his genius nephew, Gilbert, when the boy comes to stay with him.
Reprints
Keywords
quiz show; visiting nephew