The Oldest Man in Metropolis! (Table of Contents) 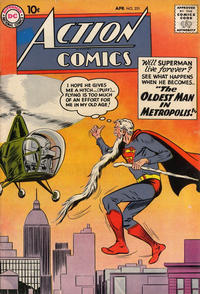 The Oldest Man in Metropolis! (Table of Contents: 2)

Genre
superhero
Characters
Superman; Prof. Vance; Perry White; Lois Lane; Jimmy Olsen; Superman robot; The Clock (villain)
Synopsis
When Clark Kent drinks Prof. Vance's life-extending vitamin serum, which contains particles of Kryptonite, it ages him to about 70 years old. Since his robots won't respond to his aged voice, Superman must fulfill his duties as the Old Man of the Sea, Santa Claus, and Father Time so that no one realizes that Clark Kent is Superman.
Reprints
Keywords
Fortress of Solitude

Genre
non-fiction
Synopsis
advocating tolerance for those different from yourself

Introducing the Girl of Steel! (Table of Contents: 5) (Expand) /

Genre
superhero; jungle
Characters
Congorilla; Congo Bill; Corliss Hyde (villain)
Synopsis
Murderer Corliss Hyde hijacks a passenger plane, which crashes into the jungle. Congo Bill, as Congorilla, saves the crew, but not before Hyde realizes that there's an intelligent mind directing the gorilla. Using gas grenades, he puts Congorilla to sleep, and fits him with an explosive collar, forcing him to commit crimes.

Includes an announcement that Tommy Tomorrow will be relocating to World's Finest Comics and that Supergirl will be joining the Action lineup. Also, an interesting question from a reader wondering whatever became of the character Captain Marvel.

The Giant Amoeba of Space! (Table of Contents: 11)