The Pied Piper of Peril! (Table of Contents) 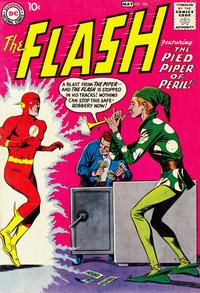 Menace of the Super-Gorilla! (Table of Contents: 2)

Genre
superhero
Characters
The Flash [Barry Allen]; Iris West; Gorilla Grodd (first appearance, villain)
Synopsis
Barry Allen's friend Fred Pearson, star of the Central City Theatre's "The Great Gorilla," has been having blackouts at the same time that a mysterious gorilla has been seen roaming the city. Flash must solve this mystery and that of a super-sonic vehicle that passes him like he's standing still. Its pilot, Gorilla Grodd, has come to find Solovar, who is being held at the Central City Zoo. Grodd steals Solovar's "force of mind," and begins his plan to take over Gorilla City. But Solovar finds Barry Allen, explains the situation, and the two of them head to Gorilla City to confront Grodd.
Reprints

The Brave and the Bold; The Viking Prince / promo (ad from the publisher) / 1 page (report information)

On the page immediately following the previous sequence.

Facts on the average speed of the 100-yard run, the orbit of Halley's Comet, the speed of a hurricane wind and function of the spectroscope.

On the page immediately preceding page 9 of "Menace of the Super-Gorilla!"

Facts on speed records: three USAF B-52 superfortress planes non-stop around world, the first crossing of the Atlantic Ocean, the Indianapolis Speedway Auto Race and swimming across the English Channel.

The Pied Piper of Peril! (Table of Contents: 10)

Genre
superhero
Characters
The Flash [Barry Allen]; Iris West; The Pied Piper [Hartley Rathaway] (first appearance, villain)
Synopsis
Barry is on time for a dinner date with Iris for the first time, but he has to run out to deal with the Piper, the self-acclaimed Master of Sound.
Reprints