The Blind Boy of Steel! (Table of Contents) 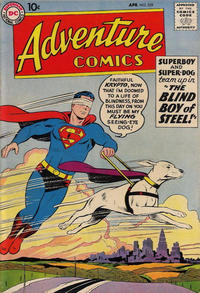 The Blind Boy of Steel! (Table of Contents: 2)

Genre
superhero
Characters
Krypto; Superboy robots; Lana Lang; Ma Kent; Pa Kent
Synopsis
A freak bolt of lightning strikes a meteor containing kryptonite, catching Superboy in the blast and giving him diamond vision which he can't turn off, so he must keep his eyes shut at all times.
Reprints
Keywords
kryptonite

First Line of Dialogue or Text
He's up there without a net.
Genre
humor

Introducing the Girl of Steel! (Table of Contents: 5) (Expand) /

The Octopus Man! (Table of Contents: 6)

Genre
superhero
Characters
Roland Peters
Synopsis
Roland Peters has constructed a brain-wave transmitter and is experimenting on illegally captured sealife when Aquaman arrives and releases his finny friends. Getting in a lucky shot, Peters knocks out Aquaman, and decides to give his device a real test run by transferring Aquaman's mind to different fish.
Reprints