The series title as given in the indicia for this issue is "64 Pages of New Captain Marvel Adventures."

Alter Ego #141 (August 2016) features the original art to this cover on page 70, and it features a paste over head, which hides the original Beck drawn head. This original cover also lists the issue number as #3, not #2. 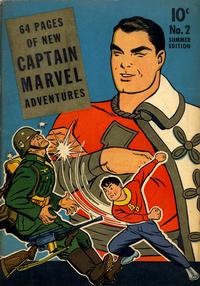 [World of the Microscope] (Table of Contents: 1)

Script credit from Bob Hughes. Excessive use of passive voice, run on sentences held together by ellipses. Limited use of sound effects, including OHHH, OOOP and the phrase "peerless strength".

[Invasion from Mars] (Table of Contents: 3)

The Curse of the Scorpion (Table of Contents: 4)

Genre
superhero
Characters
Captain Marvel [Billy Batson]; Shazam [aka High Priest of Siam]; Betty Wallace; Howell (Billy's boss); Dr. Stephen Lang (archaeologist); Professor Luther Bentley (archaeologist); James Malcolm (backer of expedition)
Synopsis
Billy joins a group of archaeologists who are involved in tomb excavations and are just about to obtain information about the ancient Scorpion Dynasty when the expedition discovers the Golden Scorpion and adjusts its lenses, causing an explosion. When the smoke clears, Billy stands before the ancient High Priest of Siam named Shazam, who gives Billy strange powers which transform him into the mighty Captain Marvel! After the group divides the lenses up among themselves, with one being given the Scorpion itself, they flee the tomb and begin crossing a swinging bridge, which suddenly collapses.
Reprints
Keywords
Death Gorge; Shazam

This text story recounts the 1st episode of "The Adventures of Captain Marvel" movie serial. Art identification by Craig Delich.

[The Pirate's Treasure] (Table of Contents: 5)

The Arson Fiend (Table of Contents: 6)