Distributed to newsstands in January 1959. This issue includes 10 pages of paid advertisements (pages 2, 9, 15, 19, 25, 27, 33-36 of comic including inside front cover, inside back cover and back cover) ; pages of comic not numbered.
On sale date as given in the copyright application as listed in the Catalog of Copyright Entries, Periodicals, January-June 1959, page 156, registration number B761308.

The Aliens Who Captured Earth! (Table of Contents) 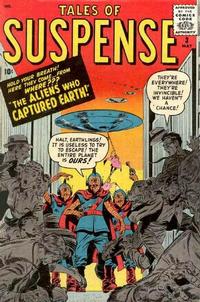 Job Number
T-198
First Line of Dialogue or Text
It was when I fell and hit my head last week that these uncanny thoughts started coming...
Genre
science fiction
Characters
Ashley Hunt
Synopsis
A scientist travels back in time to ancient Egypt and loses his memory after a paradoxical encounter with himself, or at least that's the story an Egyptian man dreamed after hitting his head.
Reprints

Narrated in the first person. Story is pages 3-7 of comic (pages of story numbered 1 to 5).

The Thing from Planet X (Table of Contents: 3)

First Line of Dialogue or Text
It's a court martial and prison for all of you--unless the investigating board...
Genre
science fiction
Synopsis
Space explorers fall under the mental sway of a sentient plant that they collect. After destroying the ship to save Earth, they say the crash was accidental, since they wouldn’t be believed.
Reprints

Job Number
T-204
Genre
science fiction
Characters
Vincent Latimer
Synopsis
A man who hates robots refuses to have a robot pilot his flight to the moon, and insists on a human pilot. The flight gets in trouble and the pilot, really a humanoid robot, saves his life.
Reprints

The Haunted House! (Table of Contents: 5)

Genre
science fiction
Characters
Joe Collins; Duke Warren
Synopsis
Two fugitives hide in an old house, disguising themselves as ghosts to frighten away children. They themselves flee the house because of ghostly noises made by fifth-dimensional beings.
Reprints

The Aliens Who Conquered Earth (Table of Contents: 6)

Job Number
T-196
First Line of Dialogue or Text
The snow glistens brightly on this clear November day in the year 2058 as...
Genre
science fiction
Characters
Darius Christopher
Synopsis
Alien invaders panic Earth with powerful distintegrating weapons, but when the president of Earth confronts them he is immune to their rays because of his own faith.
Reprints

Narrated in the second person. Story is pages 28-32 of comic (pages of story numbered 1 to 5).