On-sale date from ad in Superman #129 and copyright registration. 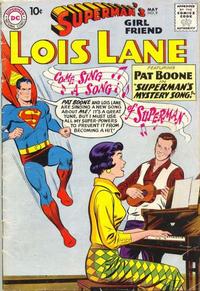 The Most Hated Girl in Metropolis! (Table of Contents: 2)

Genre
superhero
Characters
Lois Lane; Superman [also appears as Clark Kent]; Perry White; Jimmy Olsen; Lucy Lane; Ralph Edwards; Tom Caswell (Clark Kent double)
Synopsis
When a story that Lois had written and subsequently discarded is found by the Daily Planet copy boy and published, everyone believes Lois has deliberately revealed Superman's secret identity. After all of her friends turn on her and she's fired from her job, Lois turns to her sister Lucy, who suggests Lois move west and try a career in film. Once on a set, Ralph Edwards of "This Is Your Life" reveals it was part of a plan to do a show on her as "Girl Reporter of the Year."
Reprints

Do You Make Life Hard for Yourself? (Table of Contents: 6)

Genre
superhero
Characters
Lois Lane; Clark Kent (does not appear in costume as Superman); Blog
Synopsis
Clark and Lois are marooned on an island full of cavemen.
Reprints

Genre
superhero
Characters
Lois Lane; Superman [also appears as Clark Kent]; Pat Boone; Perry White; Jimmy Olsen
Synopsis
Saving Pat Boone from his fans after a concert, Superman delivers him safe and sound to the Daily Planet, where Lois and Clark practice a song for a variety show. Pat decides he wants to do a song about Superman, with Lois singing with him, lyrics written by Clark. But every time Pat and Lois try to sing the song, some freak occurrence prevents them from being heard.
Reprints

Writer identification by Martin O'Hearn.
Recording artist and movie star Pat Boone starred in five issues of his own DC Comics title in 1959-1960.