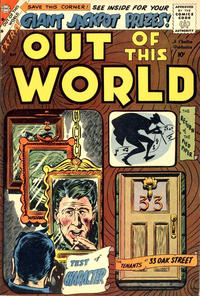 The Test of Character (Table of Contents: 1)

Job Number
3392
First Line of Dialogue or Text
Horace Whickle I shall give you the gift of complete power over the affairs of men!
Genre
fantasy-supernatural
Characters
Horace Whickle; Vision; Mr Dunston (Horace's boss)
Synopsis
Horace Whickle has worked as a bookkeeper for 22 years. Dunston calls Horace into his office and tells him to work late to find a wrong figure in an account. Later at home a Vision appears to Horace and tells him he has the power to control men and to use it for good. Horace quickly makes Dunston bankrupt and then takes over every company in the country. The Vision appears again and tells him he has become vain and to do good. Horace becomes the most powerful man in the world and declares himself Emperor of the World. Then the alarm clock wakes him up and he goes in to work as normal.
Reprints

The Antique Collectors (Table of Contents: 2)

Return of the Pied Piper (Table of Contents: 3)

The Tenants at 33 Oak Street (Table of Contents: 5)