The Battle with Bizarro! (Table of Contents) 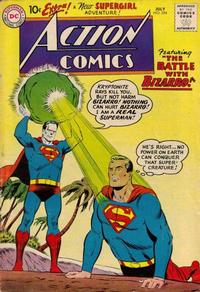 Buzzy Says "Be Sure of Your Facts!" (Table of Contents: 1)

The Battle with Bizarro! (Table of Contents: 2)

Genre
superhero
Characters
Superman [Clark Kent]; Bizarro (intro as Adult Bizarro); Lex Luthor (villain); Vekko; Perry White; Jimmy Olsen; Lois Lane
Synopsis
Luthor steals Professor Dalton's duplicating machine and creates an adult Bizarro to menace Superman, but this Bizarro turns on its creator, hands him over to the authorities, and attempts to help Superman. When the people he has helped react in horror to him, Bizarro gets depressed. He misinterprets Lois' sympathy to his plight for true affection and takes her to a remote island. But when she rejects him, he turns the duplicator ray on himself and creates a handsome bizarro duplicate, whom Lois mistakes for the real Superman.
Reprints
Keywords
green kryptonite

First Line of Dialogue or Text
So you walk in your sleep?
Genre
humor

First Line of Dialogue or Text
I'll be down in a jiffy, Vic!
Genre
humor
Reprints