In Darkest Night... (Table of Contents) 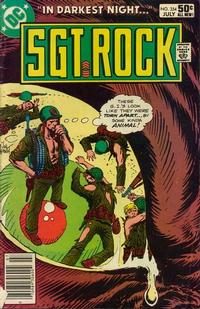 The Darkest Night (Table of Contents: 1)

Job Number
J-6996
Genre
war
Characters
Sgt. Rock; Sgt. Crowther; Hugo Temmer; Major Holst
Synopsis
Sgt. Rock has to escort a Lieutenant to a meeting with a double agent. But all the others sent to meet with this agent have died mysteriously.
Reprints

In the letters page of Sgt. Rock #359, Robert Kanigher notes that he was erroneously credited with scripting this story and that Bill Kelley is the correct author.

Most of the letter column is the first in a two-part listing of each known member of Easy Company by issue. This list was compiled by Robin Snyder. The list continues in the next issue.

Genre
war
Synopsis
The story of the first use of flamethrowers in WWI.

Job Number
J-7083
Genre
war
Synopsis
An attack is led across no-man's land by both sides.

World War I story. No dialogue; only sound effects.

Job Number
J-7002
Genre
war
Synopsis
A soldier writes a letter home, not knowing it will be his last.

Per Nick Caputo, sidebar art on the splash page and some Rock faces by Kubert.