First Line of Dialogue or Text
You will do as I command, or you, too, will be transformed into animals!
Genre
science fiction
Characters
Rip Hunter; Jeff Smith; Circe
Reprints
Keywords
centaur 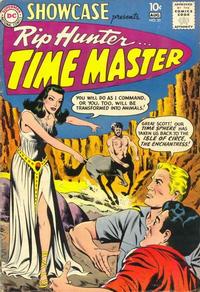 Buzzy Says "Be Sure of Your Facts!" (Table of Contents: 1)

First Line of Dialogue or Text
Have some popcorn, fellows!
Genre
advocacy; teen
Characters
Buzzy; Jim
Synopsis
Five dollars goes missing in the clubhouse, and Buzzy warns the kids to search around before making wild accusations.

The Secret of the Lost Continent (Table of Contents: 2)

First Line of Dialogue or Text
Rip! Come back!
Genre
science fiction
Characters
Rip Hunter; Jeff Smith; Bonnie Baxter; Corky Baxter (Bonnie's kid brother); Alexander the Great; warriors
Synopsis
(Chapter 1.) Rip has an ancient tablet locating Atlantis, but the last line is obliterated. They journey to Alexandria in 331 BC, because Alexander the Great owned the tablet. Rip and Bonnie will be executed as spies, but the "great metal bird" (Time Sphere) awes Alexander. The oncoming Persian army is huge, and Alexander would retreat. Rip jumps in a chariot and panics the elephants with a gasoline-soaked scarf. The war is won. Rip's crew find the tablet refers to a missing map!
Reprints
Keywords
Alexandria; Atlantis; chariot; Time Sphere; time travel

Your Passport to Strange Journeys... (Table of Contents: 4) (Expand) /

First Line of Dialogue or Text
Rip! That huge dragon - what kind of a place have we stumbled into this time?
Genre
science fiction
Characters
Rip Hunter; Jeff Smith; Bonnie Baxter; Corky Baxter; Circe; (fake) centaurs; Cretan sailors
Synopsis
Alexander points the crew to the island of Aeaea, where the tablet came from. They journey. They journey there in 700 BC. Rip and Jeff fall into a pit trap. Circe and her "centaurs" warn them off. But Bonnie and Corky find the "centaurs" wear horse frames covered with skins. Circe is a pretend sorceress to protect her people. Cretan warships arrive. Rip's crew build a dragon lifted by the Time Sphere that breathes acetylene fire, and frighten away the Cretans. Circe points out a carved map and the year Atlantis sank. Bonnie is jealous of Circe's gratitude toward Rip.
Reprints
Keywords
Ancient Greece; Atlantis; centaur; Time Sphere; time travel

Mystery of the Lost Lands (Table of Contents: 10)

First Line of Dialogue or Text
Atlantis, legendary continent that sank into the sea, may be the most famous of the lost worlds, but it...
Synopsis
Educational piece on Atlantis and other fabled lost cities.
Keywords
Atlantis; Grippia; Pathen; Renemar; Silo

First Line of Dialogue or Text
Rip! That soldier is aiming at the Time Sphere with that energy gun of his!
Genre
science fiction
Characters
Rip Hunter; Jeff Smith; Bonnie Baxter; Corky Baxter; Aliens from Jexjara; R'Del (Chief Scientist); D'Zar (dictator)
Synopsis
The Time Sphere arrives in Atlantis in 14,000 BC, but it's a futuristic space city! Orange aliens shoot ray guns, but the crew is saved by R'Dell's force field. Before the planet Jexjara exploded, the alien race split up to find a "New Jexjara". A colony came here, and would move on, but the dictator D'Zar won't allow it - and an earthquake is imminent. Rip shoots a giant earth globe to block the door. The aliens board ships to fly to New Jexjara. Rip's crew saved an alien race and witnessed the destruction of Atlantis - with more great spectacles to come!
Reprints
Keywords
Atlantis; earthquake; Time Sphere; time travel

First Line of Dialogue or Text
This is indeed a strange, mysterious island we are on!
Genre
humor
Characters
Peter Puptent
Synopsis
Peter Puptent's worry about monsters gets a jolt from his partner's shadow puppets.
Reprints