The Bride of Bizarro! (Table of Contents) 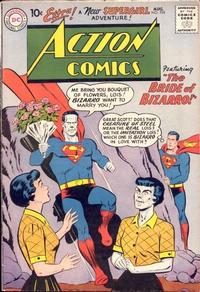 The Bride of Bizarro! (Table of Contents: 2)

Genre
superhero
Characters
Superman; Lois Lane; Bizarro; Bizarro-Lois Lane; New Bizarro
Synopsis
Bizarro keeps the real Superman from revealing to Lois that she has been proposed to by Bizarro's duplicate, whom he calls New Bizarro, with a kryptonite meteorite, but Lois realizes New Bizarro is not the true Man of Steel. But New Bizarro doesn't give up easily, and the duplicates fight each other. Bizarro seeks out Superman's help and destroys the kryptonite, turning it into a dust cloud which destroys New Bizarro. Bizarro resumes courting Lois, until Lois creates a duplicate of herself so that Bizarro can have his own Bizarro-Lois.
Reprints
Keywords
green kryptonite

First Line of Dialogue or Text
What plant stands for four?

The Abominable Snowman! (Table of Contents: 7)

First Line of Dialogue or Text
Honey, rush over to the Superb Studios...
Genre
humor
Reprints

Genre
superhero
Characters
Supergirl [Kara Zor-El; Linda Lee]; Superman (behind-the-scenes); Tommy Tomorrow (as a child, earliest chronological appearance); Mr. Tomorrow (introduction); Mrs. Tomorrow (introduction); Jik of Mars
Synopsis
Supergirl takes her first flight across the time-barrier from 1959 into the future, about a hundred years hence. She secretly observes a brilliant young orphan named Tommy on an asteroid orphanage. Tommy is told by the headmaster that a scientist and his wife have asked to adopt the boy with the best scientific mind, and he has been chosen. Supergirl ensures that the couple, the Tomorrows, make it to the orphanage successfully.
Reprints
Keywords
green kryptonite; Interplanetary Orphanage; Martian; Midvale Orphanage; time travel; Venus missile probe

Note: This story reveals that Tommy Tomorrow was adopted. (Crisis On Infinite Earths #12 would later infer that he was born Thomas Blank, the paternal grandson of Buddy Blank a.k.a. OMAC).