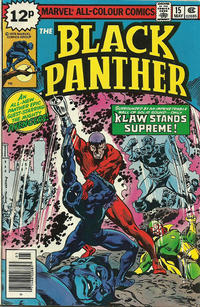 Revenge of the Black Panther! (Table of Contents: 1)

Job Number
LG290
First Line of Dialogue or Text
Early morning in Harlem--things are moving a bit too...
Genre
superhero
Characters
Klaw (villain); Avengers [Black Panther [T'Challa]; Captain America [Steve Rogers]; Vision; Beast [Hank McCoy]]; Windeagle; Thunderbolts [Levon; Herbie]; Jackie; N'yaga; Taku; Monica Lynne; Kevin Trublood
Synopsis
The Black Panther and Captain America battle the Thunderbolts street gang who use Klaw's sonic device to fight them. Klaw's power had been steadily waning over time and needed to control the street gang in order for them to use the device on him to regain his lost power. A revived Klaw is defeated by the Black Panther and the Avengers. Monica and Kevin arrive at the Wakandan consulate with Windeagle close behind.
Reprints

First Line of Dialogue or Text
Dear People, A bit over a year and a half ago, I was turned on to comics.

Letters from: Jon Green, "The Mad Maple", Anthony A. Boyadjis, and the announcement that Black Panther was cancelled but would continue in Marvel Premiere.