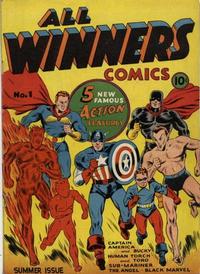 Found on inside front cover. Entire sequence added by Craig Delich 6-23-08.
The images are cut and pasted from Schomberg's cover.

Carnival of Fiends (Table of Contents: 2)

The Order of the Hood (Table of Contents: 3)

First Line of Dialogue or Text
What was the terrible new menace which was unleashed upon the...
Genre
superhero
Characters
Black Marvel [Dan Lyons]; Pat Casey; Mary Nash; The Hood (villain, introduction, death); Ihe Order of the Hood (villains, introduction)
Synopsis
The Black Marvel is forced to face the threat of a new villain and his massive organization, which threatens to inflict a reign of horror upon the American people.
Reprints

The Case of the Hollow Men (Table of Contents: 4)

First Line of Dialogue or Text
Men who are dead--and yet not dead!
Genre
superhero
Characters
Captain America [Steve Rogers]; Bucky [Bucky Barnes]; Sgt. Duffy; The Lord of Death (villain, introduction); The Lord of Death's zombies (villain, introduction); Adolf Hitler (villain)
Synopsis
Cap and Bucky face the dilemma of how to kill a dead man...a task which had to be won before they could defeat the hideous menace who considered himself the lord of death.
Reprints

All Winners (Table of Contents: 6)

First Line of Dialogue or Text
Johnny Blake put down his Marvel Comics with a sigh.
Genre
superhero
Characters
Captain America [Steve Rogers]; Bucky Barnes; Human Torch; Toro; Black Marvel; Sub-Mariner [Namor]; Angel; Johnny Blake
Synopsis
As Johnny flips through the pages of Marvel Comics, he wished that he could meet the heroes found within in person...and sure enough, he gets his wish!
Reprints

The inks credit is from Michael J. Vassallo via the GCD Error List (4 April 2006). Revised synopsis added by Craig Delich 6-23-08.

The Case of the Mad Gargoyle (Table of Contents: 8)

Genre
superhero
Characters
Angel [Thomas Halloway]; The Gargoyle (villain, introduction, death)
Synopsis
The Angel decides to investigate the strange disappearance of plane after plane (and their crews and passengers) on the Panama Pacific route, and runs into the horror of devil worshipers.
Reprints

All credits by Terry Gustafson, son of Paul Gustavson.