The issue is the first appearance of the Silver Age Green Lantern.

The on-sale date is the publication date reported in the U. S. Copyright Office filing. Copies exist with the date July 30, 1959 stamped on the cover (see http://brianbolland.blogspot.com/2012/02/my-comic-collection_08.html).

Menace of the Runaway Missile! (Table of Contents)

Some sources credit Joe Giella with the cover inking, including Green Lantern Annual, No 1, 1963 issue (DC, 1998 series) #[nn]. The cover is signed with a K over G, which at this time meant that Gil Kane did the inking also. The Schwartz pay records also list solely Gil Kane on this cover. Art Spotters Bob Bailey, Michael Evans, David Bachman and Gene Reed all agree that it is Gil Kane inks. Schwartz pay records provided by DC Comics. 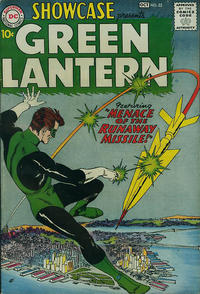 First Line of Dialogue or Text
During the ages the color green has been regarded with superstitious awe as possessing both lucky and unlucky powers...
Genre
non-fiction
Synopsis
facts about several things associated with the color green
Reprints
Keywords
peridot

Secret of the Flaming Spear! (Table of Contents: 6)

Menace of the Runaway Missile! (Table of Contents: 12)