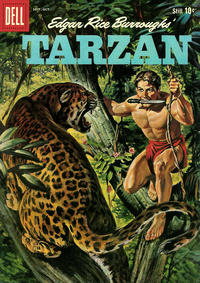 First Line of Dialogue or Text
No one goes hungry in the jungle, and the chimpanzee, relaxing after a snack, finds all is right with the world…
Synopsis
Portrait of a well-fed chimpanzee.
Reprints
Keywords
bananas; chimpanzees

Richard Richmon believes this illustration was the work of Morris Gollub not Jesse Marsh. The style and rendering are consistant with Gollub's work not that of Jesse Marsh.

Valley of Lions (Table of Contents: 2)

The Rescue in the Flood (Table of Contents: 5)

This page is not consistent with the style and work of Jesse Marsh. In my opinion the inside front cover and this page were executed by Morris Gollub the later being mild attempt to imitate the style of Marsh.